Transcripts of each Horrid episode are be found on the pages linked below. These transcripts include citations to the sources of the information presented in each episode. Transcripts also have videos or links to trailers and/or full films in the public domain. If you find an error, send a message to [email protected]. Please be sure to include a citation for any corrections or new information that you send in. Transcripts will be updated when necessary. 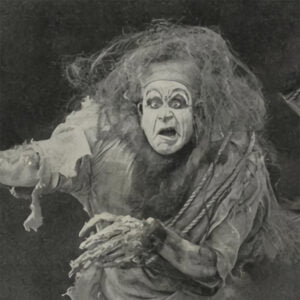 The first film adaptation of Mary Shelley’s Frankenstein was produced by Edison Studios and released in 1910. Doc Manson provides background on the director and actors, and narrates a scene by scene summary of the movie. Although the film is widely known to alter the original story, Doc gives his own interpretation of the final scenes of the film, and comments on the methods by which Frankenstein gives life to his creation.

The career of Georges Melies comes to an end, as new terrors begin to arise in the world of film. In this first part of a two part episode, Doc Manson delves into the life and history of Mary Wollstonecroft Godwin, or Mary Shelley as she would come to be known. Also discussed is the German ghost story The Family Portraits, by Johann August Apel. Is this the story which prompted the writing of Frankenstein?

This episode explores the history of horror movies with an overview of the first collection of films about haunted houses. Or, more specifically, haunted hotels. Doc Manson covers some of the real world inspiration for films of this type, namely the spiritualism movement of the late 19th century. A deep dive is performed of James Stuart Blackton’s special effects masterpiece, The Haunted Hotel. Other filmmakers mentioned include Edwin S. Porter and Segundo de Chomon.

The first trend in horror cinema emerged in the late 19th century. The Faustian tale was a long celebrated staple of literature and theater, so it is of little surprise that it translated so quickly to the medium of film. Doc Manson researches the historical origins of the German legend of Faustus, reviews scholarly interpretations of records from the 16th century, and investigates some of the earliest lost Faustian films, including The Laboratory of Mephistopheles by the french illusionist and filmmaker Georges Méliès. 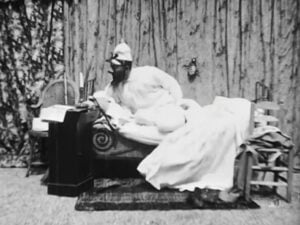 The history of horror movies continues with this second episode of Horrid. In this companion piece to episode one, Doc Manson further explores the works of Georges Méliès, the creator of the first horror film, The House of the Devil (Le Manoir du Diable). Synopses are provided for The Haunted Castle (Le Château Hanté) and A Terrible Night (Une Nuit Terrible). Doc dives deep into these films, correcting common misconceptions and misattributions found online. Also explored is evidence from Pauline Méliès, Georges Méliès’ great-great-granddaughter, which suggests that A Terrible Night might not actually be the film it is claimed to be.

The first episode of Horrid is dedicated to the very beginnings of horror in film. Doc Manson discusses the very origins of the film medium in the context of the first filmmaker to direct a horror movie, Georges Méliès. A brief biography of Melies is presented, as is a summary of the first horror movie, The House of the Devil (Le Manoir du Diable), from 1896.